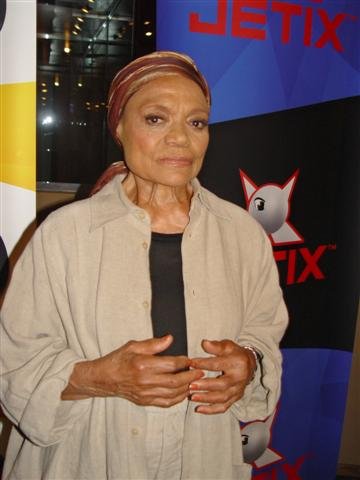 Today, I learned the news that legendary singer, actress, dancer and icon Eartha Kitt died on Christmas day. I have seen her perform a couple of times. I think the last one was several years ago at the Cinegrill at the Roosevelt Hotel.

The last time I saw her was at the Republic Restaurant on La Cienega in September 2006, when I had an exclusive interview with her. I also met her daughter, Kitt Shapiro, who was very nice to me.

Here’s the interview I had with her, which came out on Balita.com (the article was not available anymore so I am posting here again):

An exclusive interview with the original ‘Catwoman’

At 79 years-old, the quintessential femme fatale chanteuse who is best known for her velvety purr of a voice and as the original (and the best) ‘Catwoman’ ever been (she starred on “Batman” television series in the late ‘60’s which is currently in reruns), is still as busiest as ever doing hall concerts, movies, television, and one thing she enjoys dearly — voice-acting.

“I just came out of Cincinatti, Ohio, and did a concert this last Friday (today is Monday, August 28). It was absolutely wonderful because I love working closely with people. They are in front of me so we can have a lot of fun – face to face! And I will probably go back to Carlyle Hotel in New York City sometime soon to do more shows,” she said smilingly during this exclusive interview at the Republic Restaurant and Lounge in West Hollywood where Walt Disney threw a party celebrating all of Disney Channel’s upcoming fall season shows, including “The Emperor’s New School” where she does voice-acting for “Yzma”, the ruler of Yzmapolis.

Notably outspoken and at times misunderstood, when I asked her if it is possible her fans to see her doing another concert in L.A. ( I recommended The Roosevelt Hotel’s new lounge where I last saw her a few years ago in concert), she quipped — “There’s no better night club in L.A. and it’s a shame! The Roosevelt Hotel is terrible. I don’t want to be working in a basement! And it’s not a very conducive place for anybody to be, down in a basement! But I’m glad it’s working – but, it’s not for me!”

A woman who got her star on the Hollywood Walk of fame during the presidency of John F. Kennedy, Ms. Kitt has written two autobiographies (“Alone With Me” and “Thursday’s Child”), and another one released in 1988, “I’m Still Here”. She was an illegitimate child who broke into the Cabaret scenes of New York City in the early 50’s. She traveled all over the world with the famous Katherine Durnham troupe.

By 1957 she was starring on Broadway and appearing in movies with Sidney Poitier, Nat King Cole and Sammy Davis, Jr. She has made songs famous such as “C’est Si Bon, “Santa Baby,” “Apres Moi,” “Uska Dara,” and “I Want to be Evil.” Eartha Kitt was the toast of Europe, a performer who sings in 10 different languages! .

In 1968, a controversy plagued her career when during a chat with then first Lady Bird Johnson, she criticized the impact of the Vietnam war on poor minorities, and allegedly infuriated the President. Since then, she was blacklisted in America and was exiled to Europe to find work. “I was criticizing the war and not my government, nor my president,” she was noted to explain to the media. But everything still works out well with this woman, whom Orson Welles once quoted as “the most exciting woman in the world,”

She isn’t slowing down – Eartha had a month-long run concerts at New York City’s Café Carlyle, “Live at the Carlyle,” which was recorded and will be released on CD this fall, which had critics raving. She’ll soon start working on two original Broadway productions. “I am working one in off-Broadway called “Mimi Le Duck” and the other one is “The Way We Are,” which is also a Broadway production. I was in “Nine” and in “Wild Party” on Broadway, recently. So, I’m still busy all the time.”

The multi-talented Eartha Kitt is still currently voice-recording for the second season of the animated “The Emperor’s New School” Disney television series (Saturday mornings on Disney Channel), where she plays the evil ruler Yzma from the original animated “Emperor’s New Groove” movie in 2000. “We’ve done 24 episodes. I must say that I mostly enjoy doing this animated voice-over because Yzma is hysterically funny! Everytime, I work with people in Disney, they are in Los Angeles and I’m in western Connecticutt in the studio there. And the way they want me to play the character, it’s hysterical with each other, so I really enjoy it,” referring to her character as the evil ruler Yzma. We started about five years ago with Emperor’s New Groove (the movie), and the second we did was on television about three years ago. Last year, “Kronk’s New Groove” was released on DVD. This is the second season of “School” which we started about two years ago. Yzma is running the empire and she wants to build houses in Yzmapolis. I sing in that one. It’s coming out sometime in November — I think November 11,” she corrected.

The singer, dancer, and actress is happy about the fact that generations are still seeing her on television not only as the former ‘Catwoman’ but through her distinctive voice character, Yzma. “Oh yes, because it gets me acquainted with the younger generation. This generation gets to know my voice and as a result keeps the kids going on. I love doing it. It’s just Yzma is mischievous and she just like playing game – of course, all because she wants to run the Empire. Now, everybody still recognize that distinctive voice and the laughs! I love life and performances as well as doing animated film voice-overs because it’s an awful lot of fun. You could play that character to the hilt. But on the stage, I get immediate truce from the audience and I always get the best directors on live performances.

My last question to the legendary entertainer was — If you would have to define Ms. Eartha Kitt, how would you define her? “I wouldn’t — because I never know who I am going to be, at any given moment. But I know who I am basically — I’m a girl from North Carolina who’s hiding all the time because she’s afraid of being rejected and that’s whom I’ve always revert back to. But the characters they call on me to play are usually of that very mischievous person, very naughty. And I like that! Because I’m always with tongue and cheek anyway. My whole humor is to tease you, and amuse you, but not to hurt you,” she closed.

Ms. Eartha Mae Kitt will be celebrating her 80th birthday in January 27 with a performance at the Carnegie Hall, where she performed 50 years ago. Her colorful life is in the works for an autobiographical film, starring Halle Berry.